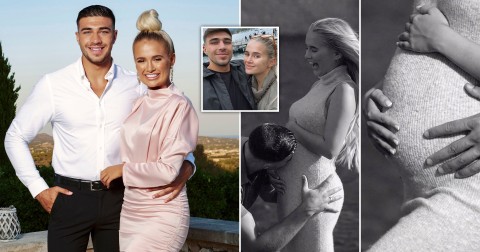 Molly-Mae Hague and Tommy Fury have announced that they are expecting their first child together.

The couple, both 23, got together during the 2019 season of Love Island, where they finished as runners-up to Amber Gill and Greg O’Shea.

Taking to Instagram to share the joyous news, the caption read: ‘I can’t wait for the adventures that we haven’t even dreamed of yet.’

The cute montage showed Molly-Mae and Tommy declaring their love for each other in the 2019 Love Island final, after it quickly cut to a close-up of Molly’s baby bump with Tommy kissing her belly.

Fans and fellow celebrities rushed to wish the pair congratulations, with Youtube star Saffron Barker writing: ‘I am so happy for you both 😭 what truly beautiful parents you will be!!!’

Series five star and bestie Maura Higgins took to Instagram stories and shared a snap of Molly-Mae getting a scan.

‘The most precious day meeting you,’ she wrote. ‘@mollymae &tommyfury you are going to be the most amazing parents.

Molly-Mae and Tommy have become one of Love Island’s longest-lasting couples.

The pair recently opened up about wanting children, with Tommy voicing his enthusiasm for a large family.

He revealed: ‘I want four kids but it’s Molly’s body and she’s the one who has to go through it – but I’ll be there with her every step of the way.

‘I’m a big family man and come from a big family too and it’s something we talk about a lot. I don’t think it’s in the far too distant future…’, he told The Sun.

The creative director of PrettyLittleThing proudly announced she had bought her first home with boyfriend Tommy Fury earlier this year.

It came after the couple had to flee their apartment in Manchester after burglars stole £800,000 worth of jewellery and clothes.

Viewers weren’t sure about the strength of Molly-Mae and Tommy’s partnership during their time on Love Island, but the pair have proved their romance is genuine since leaving the show.

The loved up couple have also been the subject of engagement rumours in recent months, but boxer Tommy confirmed that nobody will know when he’s going to pop the question as he will do it on the spur of the moment rather than planning a big proposal.

In a Q&A with his followers on Instagram Tommy was asked: ‘When are you going to put a ring on Molly Mae?’ to which he winked at the camera and confirmed: ‘Sooner than you think.’

Another asked: ‘When you gonna have some little Furys?’ to which Tommy replied: ‘I don’t know. I’m not the person to ask that question to. I would like them sooner rather than later but maybe you should go and ask that to the Mrs.’