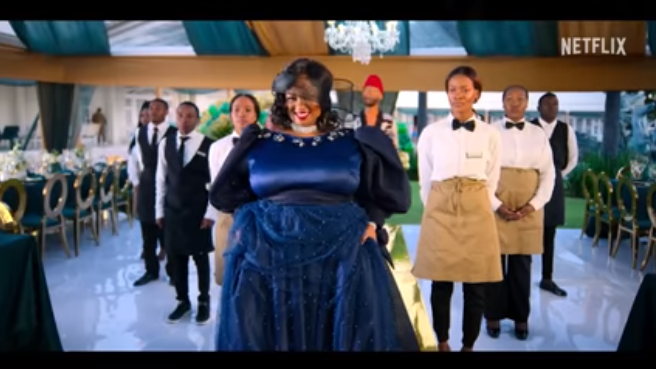 Netflix has released the official trailer for the third season of hit series How To Ruin Christmas’.

After two hilarious and chaotic Christmases, the Sellos and Twalas are back in the latest installment titled, ‘The Baby Shower,’ to celebrate the birth of Beauty (Thando Thabethe) and Sbu’s (Sandile Mahlangu) baby.

With a baby on the way, Sbu’s overbearing mother, Valencia Twala (Charmaine Mtinta), scandalous secrets and Succulent, the Sello family’s beloved goat, the stage is set for a showdown between the two families in South Africa’s fan-favourite.

How To Ruin Christmas: The Baby Shower

Denise Zimba will join the cast as Zama, a slay queen ready to add more chaos to an already imploding baby shower.

Following the death of Busi Lurayi, who passed away earlier this year, the Tumi Sello character is not part of the third season of the hit Netflix limited series. According to Netflix, the Tumi character had wrapped its storyline in season 2, hence Tumi left the group.”

In addition to the bundle of joy, this season returns with Beauty and Sbu’s first wedding anniversary, an unplanned delivery, a blackmailing slay queen and more.

With a baby on the way, can these families put their differences aside and finally enjoy Christmas together?

Find out when Netflix’s ‘How To Ruin Christmas: The Baby Shower’ premieres on December 9, 2022.