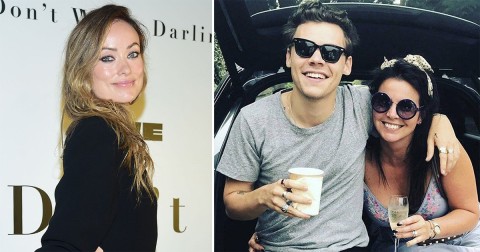 Harry Styles’ mum Anne Twist has spoken out on receiving ‘vitriolic comments’ since she supported her son’s film Don’t Worry Darling and his girlfriend (and the director of the film) Olivia Wilde.

Anne had shared a snap of herself going to see the new film, writing on Instagram: ‘First time in the French cinema .. first day showing .. ‘Don’t Worry Darling’ you were excellent!

‘Really enjoyed from start to finish. Well done @oliviawilde and team for drawing us in, well done baby @harrystyles for being a fabulous Jack. Very proud as usual 😊 👏🏼👏🏼👏🏼.’

However, hours later, Anne, who is a firm supporter of her son, often attending his shows, shared a statement on her Instagram Stories, reading: ‘”If you can’t say something nice, don’t say nothing at all.”

‘I’m astounded and saddened by the vitriolic comments on here to be honest. I enjoyed a film. If it’s not your cup of tea don’t go. If you don’t like me, please don’t follow me. Simple.’

Harry stars alongside Florence Pugh in the highly-anticipated psychological thriller – but fans have been a little distracted by all the drama in the weeks leading up to release.

Anne spoke out on the comments

It was reported that Florence and Olivia clashed behind-the-scenes. Speculation amped up further when it was claimed that the Marvel star had limited her promotion of the film to the Venice Film Festival premiere.

However, Olivia had nothing but praise for the actress and sung her praises during a recent interview.

‘She’s ferociously talented,’ she told Interview Magazine of Florence. ‘She was so dogged in her pursuit of the most authentic version of every moment.

‘She also knew that my real goal was to create a love story that felt so sincere between her and Harry that people would be incapable of not falling for them as a couple. It had to be a love that felt real – it had to be passionate, but textured.

‘I wanted so badly to have a nuanced, layered relationship that people would buy into despite knowing at times in the film that they shouldn’t. Even when the movie suggests you should question them, I wanted you to fight it.’

Meanwhile, the internet was sent wild when some claimed Harry Styles, unprovoked, decided to spit on Chris Pine (we’re pretty sure he didn’t, but the singer had the best response to the hullaballoo at one of his shows).

That’s not even to mention the disagreement between Olivia and Shia Labeouf, who was previously attached to the film before Harry.

But, after all the chaos, it’s expected to storm the box office – so it seems there really is no such thing as bad publicity.