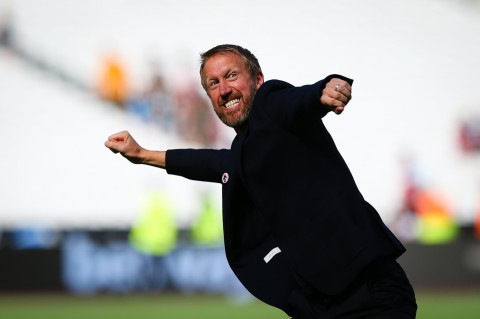 Leao, 23, will line up against Chelsea tonight as Milan seek to hit back in their Champions League group game following a 3-0 defeat in west London last week.

The Portugal international played a key role in AC Milan’s Serie A title success last season with 11 goals and eight assists, carrying over his excellent form to the new campaign where he has four goals and seven assists across 11 games in Serie A and the Champions League.

Potter has been reluctant to discuss players Chelsea are interested in signing but ahead of Tuesday’s clash at San Siro, admitted his admiration for the Milan star.

‘The player you mentioned is part of that team,’ Potter told a press conference on Monday. ‘You can see his quality and what he brings.

‘He’s part of a strong team, a strong club and a strong set-up, and we respect that.’

‘We have already started talking to him. But not now, for a long time. Every renewal can be simple or complicated, the will of the player makes the difference because that of the club is there,’ Maldini told Sky Italy in September.

‘Renewal is an issue that we addressed many months ago.

‘Rafa knows that to become stronger than now the solution is to stay with us. We are a young and growing team. He still has to learn many things but we intend to do great things and grow with him.

‘Chelsea’s officially written offer did not arrive but on an informal level it did. Of course, it was rejected.’

Leao joined AC Milan in 2019 from French side Lille having started his career in Portugal with Sporting Lisbon.

Chelsea picked up their first Champions League win of the season against Milan last Wednesday with both them and the Rossoneri taking four points from their opening three games.