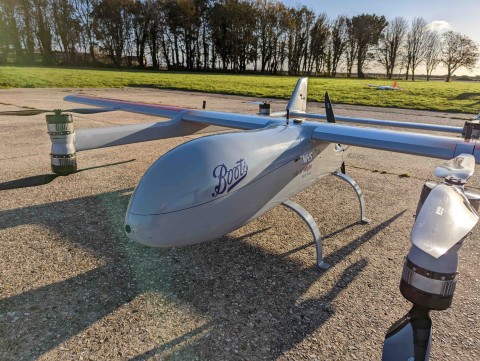 Boots has become the first community pharmacy to deliver prescription drugs using a drone in the UK.

The small aerial vehicle carried medicine from Baker Barracks on Thorney Island near Portsmouth to St Mary’s Hospital on the Isle of Wight.

The drugs were then transferred to local pharmacies, where they will be available for patients.

The delivery was a trial run using technology from medical drone firm Apian. Boots will now assess exactly how useful drones are as an unmanned shipping mechanism.

‘In this trial, we will be looking at how much time we can save, as well as how we can incorporate drones into our medicines supply chain to create economic efficiencies too. We want to prepare now for the wider use of this technology in the future.’

NHS England previously announced it would use drones to deliver products like chemotherapy to the island in a bid to speed up their arrival.

The Royal Mail has also said it wants to introduce a network of up to 200 drones to deliver post to hard-to-reach locations over the next three years.

The route between Cambridge and Rugby is one of several projects intended to help ‘integrate drones into the transport system.’