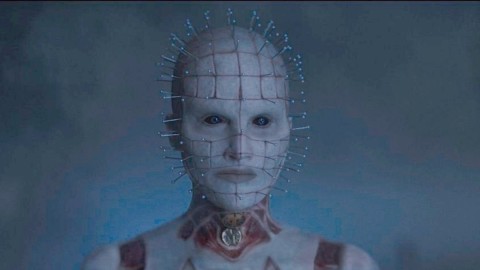 The trailer for Hulu’s eagerly-anticipated Hellraiser reboot has arrived and it had such sights to show us.

The streaming service is set to breathe new life into the classic Clive Barker franchise, boasting a new-look Pinhead and creepy Cenobites straight from your worst nightmares.

The first trailer for the film plunged us into the Labyrinth once more ahead of the show’s release later next month, giving us a closer look at Pinhead, central character Riley, and the brand new Cenobites.

Hellraiser will see Jamie Clayton take over the role of iconic villain Pinhead with other cast members including Odessa A’zion as Riley, and Goran Visnjic and Hiam Abbass in as-yet-untitled roles.

The new adaptation will be directed by David Bruckner, best known for his work on the likes of The Ritual, The Nighthouse, Southbound, and horror anthology V/H/S.

Despite trepidation from some over the release, with the latter films in the franchise often panned by critics and fans alike, many have raved about the trailer on social media.

‘Judging by the trailer, the new #Hellraiser looks better than I could have ever hoped for. Jamie Clayton is going to crush it,’ one Twitter user wrote.

Another said: ‘I really like this new #Hellraiser trailer. It has a good director and I like how it feels entirely different. IMO, the series needed this change.

‘I feel the original series stagnated after the second and became entirely inaccurate after the first. So let’s see where it goes.’

A third added: ‘Expectations are in the gutter given how Hellraiser has been treated for years and years but I gotta say, this trailer makes it seem pretty good. Please don’t disappoint.’

My body is ready #hellraiser https://t.co/NuUW48ne6e

I wouldn't consider myself a huge #Hellraiser fan, BUT get me with your greater delights!https://t.co/XxLYWyOrPq

New Hellraiser trailer has me losing my mind pic.twitter.com/6slqXaoRM1

Do yourself a favor and watch the HELLRAISER trailer again on your tv. Stunning and terrifying.

Well if you ain't seen the new Hellraiser trailer, you oughta. Not too shabby at all. https://t.co/IxF6gG5Jaw

Hellraiser is very not my kind of movie but I cheered seeing Jamie Clayton as Pinhead in the new trailer. Trans women can be s&m demons from a suffering dimension, as a treat

The new Hellraiser trailer makes me very happy. Damn. I mean nothing tops Doug Bradley as the Hell Priest, but still wow. pic.twitter.com/xdf3Z4mO2s

Have been in a state of cautious optimism about the new HELLRAISER for a while, and the trailer bolsters that. Def has a HELLBOUND vibe to it, and I’m loving the look of the Cenobites. Excited for Oct 7. #Hellraiser

The latest release will be the 11th film in the franchise, following the 2018 release Hellraiser: Judgement.

Based on the novella by Clive Barker titled The Hellbound Heart, the Hellraiser franchise centers around the Cenobites and the Hell-like realm from which they come, accessed via a puzzle box.

The Cenobites were former humans, now monsters, who harvest human souls to torture

The official synopsis for the new film reads: ‘A reimagining of Clive Barker’s 1987 horror classic in which a young woman struggling with addiction comes into possession of an ancient puzzle box, unaware that its purpose is to summon the Cenobites, a group of sadistic supernatural beings from another dimension.’

Hellraiser will be released via Hulu in the US on October 7, however, as Hulu is not available in the UK, it is unknown when we will be able to watch the new film.

It is likely that Disney Plus will stream the release after handling other Hulu premieres such as new Predator film Prey.