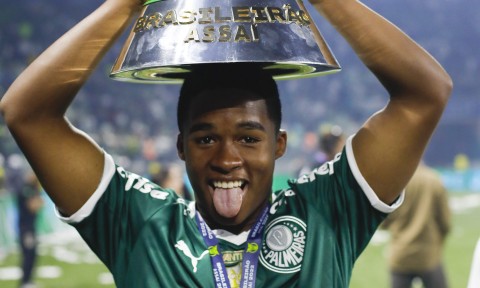 Chelsea have told Brazilian sensation Endrick that he will have a place in the first team when he joins the club as the Blues look to beat off competition from Real Madrid and PSG for his signature.

The 16-year-old Palmeiras star has netted three times in just six top-flight appearances – registering a goal or assist every 61 minutes – and has already been dubbed ‘the new Neymar’ after helping his side lift the Brazilian title.

Some of Europe’s biggest clubs are circling, with Real Madrid long having been considered the frontrunners given their well-established recruitment network in South America – which has seen the likes of Federico Valverde and Vinicius Junior join as teenagers.

But Chelsea are ‘pushing hard’ to land Endrick and have been ramping up their charm offensive in recent weeks, having invited the youngster’s family to their Cobham training centre.

They were also introduced to Thiago Silva, who attempted to sell the club to the young forward’s family, while the legendary Brazilian skipper is also believed to have met Endrick personally.

Now transfer guru Fabrizio Romano claims Chelsea made a promise to the teenager’s family during their recent meeting in which the west London club gave assurances that Endrick would be fast-tracked straight into the first team when he eventually joins.

He cannot actually sign with a club until early 2023, while a move to Europe will have to wait another year after that once he has turned 18.

By that time, though, Chelsea believe he will have firmly established himself at Palmeiras – accruing plenty of experience in the process – and will be ready to step straight up into the first-team squad at Stamford Bridge.

The Blues told Endrick’s entourage that they view him as one of the most promising teenagers in world football and can be an ‘important’ player from the moment he arrives at the club in 2024.

Endrick’s family will weigh up a host of factors before deciding which club to join, with a clear pathway and development plan one of their main considerations.

Whoever wants to sign the teenager will also have to stump up a massive fee, with Fabrizio Romano confirming that Palmeiras have set his price tag at €60million (£52.5m) – which is his release clause.

However, the Brazilian side will allow that package to include add-ons and clauses.

Endrick’s father, Douglas, recently said of negotiations: ‘There’s nothing decided for Real Madrid or any other club. We’ve no preference yet.

‘We’ll decide in the next months, the club that will pay what Palmeiras want and show us the best technical project for Endrick, will sign the boy.’