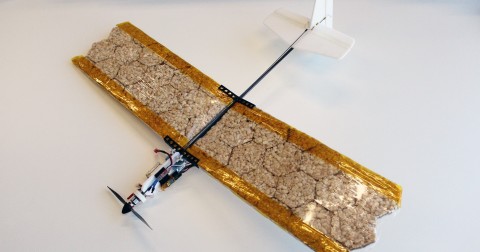 Edible drones could be coming to the rescue of starving disaster survivors in remote areas.

Researchers have developed a small flying craft with wings made from rice cakes that could potentially deliver life-sustaining nutrition or medication.

Drones can be crucial during natural disasters by transporting supplies to people in need, but they can only carry about 30 percent of their mass as payload.

A team at Swiss Federal Institute of Technology Lausanne (EPFL), sought to find a solution by making the delivery drones themselves out of food.

The researchers made the wings both as functional for flight and cargo. They fashioned the wing from rice cakes laser-cut into hexagonals and fixed together by gelatin.

The wings are made of rice cakes laser-cut into hexagonals and fixed together by gelatin.

These are then wrapped in protective plastic, before being affixed to the flying element.

Corn starch and corn starch with chocolate were both trialed as adhesives, but gelatin displayed stronger properties.

A prototype drone was able to successfully fly 10 metres per second (32 feet). Now, the team wants to transform other nonedible pieces like the rudder, could be made using 3D-printed edible material.

The team is also looking at ways to transport water onboard.

The wingspan of about 27 inches is enough rice cake and gelatin glue to deliver the equivalent of one breakfast serving—with 80 grams remaining for a payload of vitamins or water.