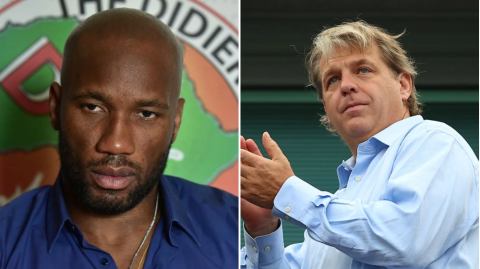 The 48-year-old has had a busy start to his tenure at Stamford Bridge, spending more than £250m on new signings over the summer and then sacking manager Thomas Tuchel after just seven games of the 2022-23 season.

Boehly has come under fire after suggesting the Premier League should launch a North versus South All-Star game and also for reportedly sacking several members of Chelsea’s backroom team, including their head of medical and chief physio.

Drogba is one of a number of Chelsea legends who had a good relationship with former Blues owner Roman Abramovich and the legendary striker believes the Stamford Bridge club are ‘lacking class’ under the Russian’s replacement.

‘I knew this club with a certain class during the Roman Abramovich era, but today I find it lacking,’ Drogba, who won four league titles and the Champions League at Chelsea, told Canal+.

‘It’s very hard for me to see how they got rid of certain people, for example the physiotherapists, who were there for a very long time. They should go back to the principles and values they had.’

Tuchel led Chelsea to three trophies after replacing Frank Lampard as manager in January 2021 but was axed after an underwhelming start to the season, with Graham Potter subsequently named as his successor.

‘I was surprised by the sacking,’ Ballack told SportBILD. ‘For me it was incomprehensible when a coach is dismissed so quickly.

‘Especially because Thomas Tuchel had such a great success like winning the Champions League.

‘You can see that a new owner brings a new philosophy with a new understanding of ideas. Everyone has their own people they want to rely on, so they made the hard cut with the trainer.

‘We have to see if it works in the long term. I believe that you have to approach such a successful and big club carefully. Chelsea doesn’t need any upheaval! Todd Boehly is doing it differently now with his elbow mentality.’

Chelsea have won four games in a row under new manager Potter and will look to continue their winning run on Sunday when they face Aston Villa.