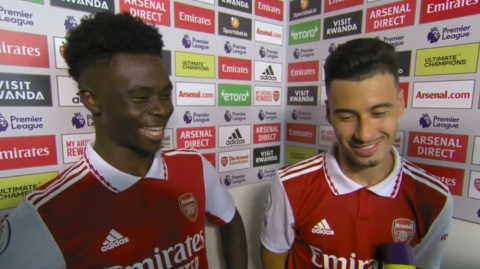 The Gunners extended their lead at the top of the Premier League table with a superb 3-2 victory over Jurgen Klopp’s side on Sunday at the Emirates.

Martinelli scored after just one minute and registered an assist while Saka got on the scoresheet twice as the duo impressed once again.

Murphy heaped praise on the two players, telling Match of the Day: ‘Sometimes analysis can be made simple for you by wonderful footballers playing with confidence.

‘Yes, there are always aspects of a game that you want to look at in terms of tactics or mistakes but today, Arsenal, the positivity was there for all to see.

‘The two young lads [Bukayo Saka and Gabriel Martinelli] playing left and right for them would be giving any defences in Europe or world football a problem.

‘Great players can force teams into mistakes. They’re relentless. They’re so direct and so full of confidence at the moment.

"Credit to Bukayo, especially after what happened over a year ago." 👏

Mikel Arteta full of praise for his #AFC side 🔴 pic.twitter.com/RaZKwE7i6D

‘Obviously, to concede in the first minute of a game is a terrible start for Liverpool, but it’s a brilliant goal with both those two involved.

‘The rest of the first half was pretty even actually and Liverpool got back into the game. But Arsenal have these two flying at Liverpool’s [defensive] players.

‘They’ve not just quick and skilful, they have end product to their games. Spotting the runs, making the right passes, good decision making.

‘I love everything about Arsenal at the moment. They’re well balanced, they’ve got a great set up and that gives them the freedom to go and cause problems.

”They have a lovely blend of experienced players with these young lads coming in.

‘Mikel Arteta has a way of playing, they all know their jobs, but more importantly they’re playing with that freedom.

Could a lack of squad depth derail Arsenal's hopes of a title challenge? 😬🏆

‘With young players, if you have a manager who is giving you freedom to express yourself, then you are going to have a chance.’

Murphy, though, does not feel Arsenal are serious contenders for the Premier League title due to the strength of Pep Guardiola’s Manchester City.

‘It looks like at the moment [they are Manchester City’s main rivals for the Premier League title],’ he added.

‘I don’t see them seriously challenging. The main reason is simply because they can’t keep their best XI fit all season.

‘City don’t have to, because they have that much quality. If two or three Arsenal players come out the side, they don’t have the same strength.’

The Gunners return to action on Thursday when they travel to face Bodo/Glimt in the Europa League.