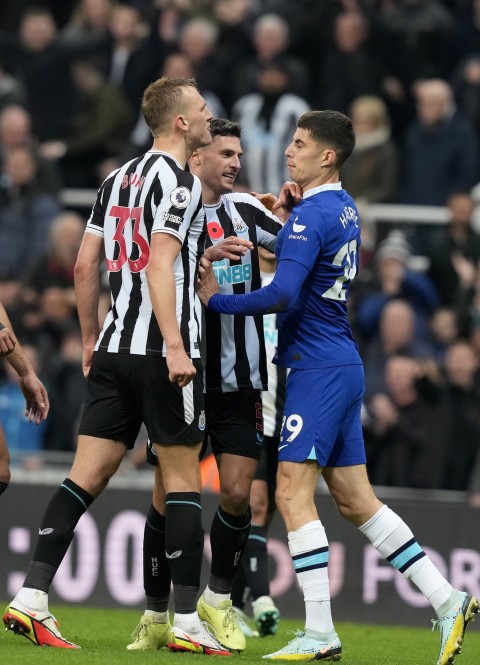 Dan Burn has played down the severity of his injury-time scuffle with Kai Havertz following Newcastle United’s 1-0 win over Chelsea on Saturday.

Joe Willock’s superb strike in the second half sealed a deserved victory for Eddie Howe’s side at St James’ Park, which has left them third in the Premier League heading into the World Cup break.

In the closing stages of the match, both sets of players were involved in a brawl on the pitch after Burn and Havertz squared up to each other.

The two players share a history as the Chelsea forward escaped a red card when he elbowed the Newcastle defender during their game at Stamford Bridge in March.

When asked about the incident after Saturday’s game, Burn said: ‘It was the emotion of the game wasn’t it?

‘Me and Kai had a few run-ins before and it’s just part and parcel of the game. It can get the better of you at the times.

‘But when you are in that environment and clinging on in stoppage time and wanting to win the game these things happen.’

Newcastle have already reached 30 points in the Premier League – a milestone which they did not manage until March last season.

‘It’s nice to hear that. Last season was a very, very difficult season, a very different one to the one we’re experiencing this time around,’ Howe said.

‘We just want to get as many points as quickly as we can. We’re enjoying the moment we’re in, everyone’s together, everyone’s united, really fighting for the same cause and the players tonight deserve huge credit for what they delivered.

‘I thought it was up there with our best displays of the season.’