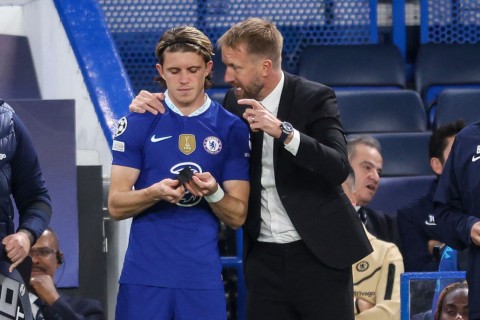 Chelsea made a key mistake over Conor Gallagher this summer, according to Glen Johnson.

The 22-year-old England international midfielder spent last season on loan at Crystal Palace in the Premier League and massively impressed.

Gallagher scored eight goals across 34 top-flight games and was named Crystal Palace Player of the Year for 2021-22, working under boss Patrick Vieira.

He was again linked with a loan move for the 2022-23 season, with Crystal Palace interested in taking him back, while other Premier League clubs were also keen.

Aston Villa, West Ham, Everton and Newcastle United were all linked with loan moves for Gallagher.

But the Blues decided to keep him at Stamford Bridge instead, with Gallagher limited to 158 minutes of Premier League action across Chelsea’s first six games.

‘I don’t think in terms of leaving the club, but another season on loan for Gallagher would have been great for him,’ Johnson told SafeBettingSites.

‘Personally I would have liked him to carry on his development, he was clearly enjoying himself.

‘I’d rather have Chelsea have let him go back out on loan and then re-evaluate the situation at the end of the season.’

Gallagher endured a game to forget in Chelsea’s 2-1 win over Leicester City last month, being sent off before the half-hour mark for two bookings in seven minutes.

He was an unused substitute as Chelsea lost to Dinamo Zagreb in the Champions League – a result which saw Thomas Tuchel sacked and replaced by Graham Potter – and he played nine minutes as the Blues beat Red Bull Salzburg.

‘As long as he’s the Aubameyang of old and wants to be there, he’s proved that he is a goal machine when he’s happy,’ Johnson added.

‘They’ve got a good player, it’s just more about where his head’s at.

‘[Sterling has] not surprised me because I’ve always thought he’s capable of this, he doesn’t surprise me at all.

‘The surprise is that Man City let him go to Chelsea. Sterling is capable of what he’s doing at the moment and you’d have to say he is their main man at the moment.

‘[Mount] set the bar really high. He was pretty much the centre of everything that Chelsea did well last season. You don’t lose your class overnight.

‘It’s just a little bit of confidence that’s missing, he’s still capable of top performances and I’m sure he’ll bounce back soon but he’s just not firing on all cylinders at the moment.’