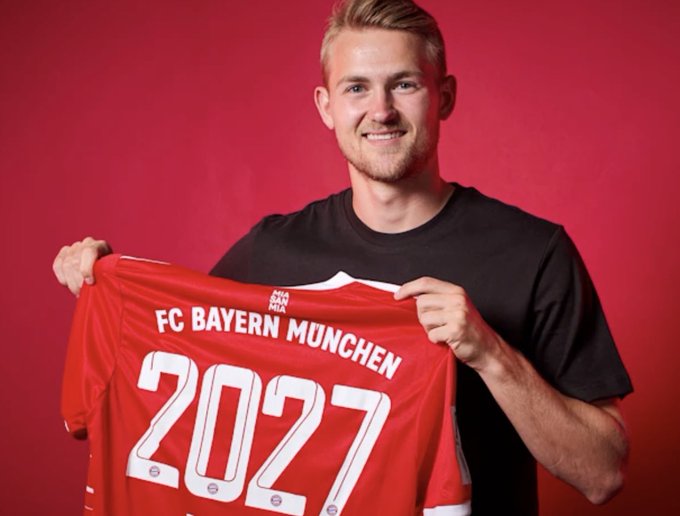 Bundesliga champions Bayern Munich have further strengthened their defence with the signing of Netherlands centre-back Matthijs de Ligt from Juventus.

The 22-year-old has signed a five-year contract at the Allianz Arena and becomes the latest big name arrival in Bavaria this summer after the club captured Senegal superstar Sadio Mane.

He now joins Bayern in a summer of change for Julian Nagelsmann’s men, who have seen Robert Lewandowski agree to join Barcelona and lost Niklas Süle to rivals Borussia Dortmund but moved quickly to bring in Mane, as well as De Ligt’s former teammate in Amsterdam, Noussair Mazraoui, and fellow Ajax academy graduate, Ryan Gravenberch.

“We wanted to bring Matthijs to Munich three years ago. We were convinced of his qualities as a defender then, and we are even more so today,” added sporting director Hasan Salihamidzic. “With his professionalism, his desire and his wonderful character, Matthijs fits our team as well as our ambitions. He will play an important role at Bayern on and off the pitch. He was already a leading player at Ajax as a youngster, and he is still capable of development at the high level he is at, at the age of 22.”

“I am very happy to become a player of this great club. Bayern is the most successful club in Germany, one of the most successful clubs in Europe and also in the world,” a delighted de Ligt said of his signing. “Right from the start, I felt honest appreciation from the sporting management, the coach, and also the board of directors, and that convinced me. In addition, Bayern is an outstandingly managed club with great goals. I am very happy that I will now be part of Bayern’s history.”