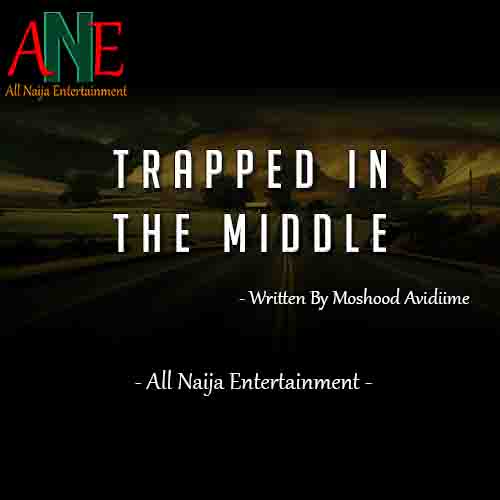 TRAPPED IN THE MIDDLE by Moshood Avidiime

Mama and Tricia have not always been like this.

One time, they were very good friends.
.
After I told Mama what Tricia had done for me in my “dire” time of need, Mama could not wait to see her.

They finally met a year later and it was love at first sight.

I didn’t even know how to tell Mama that I had no idea as well (the majority of it anyways).

“It is not as though I go about asking to know a girl’s lineage you know”.

(But Mama would beg to differ).

Tricia and I, have been friends quite alright but discussing “backgrounds” was never really our thing.
.
“If you can’t marry a girl, Greg, I see no reason why you should even consider asking her out in the first place”. Mama would always admonish me, after she’d asked what my plan is, towards a certain female I am seeing and my response to her be, “I have none”.

(PS: Mama and I are best of friends, so we can actually talk freely without holding back, with utmost respect).

Because I usually have no long term plans, because certain questions, early in a relationship plants ideas, ideas that might not always be a perfect representation of what truly goes on in a guy’s mind, I’d simply resolved to stay away from being too forward in these “getting to know ourselves” processes.

I suppose this was why these sorta conversations never really came up, between Tricia and me.

So you’ll understand why Mama had expected me to have known everything there was to know about Tricia. To have had answers to what she usually termed a “basic starter, to getting to know each other”.
.
Tricia and I were not dating during the time she met Mama.

We were just friends.

Very good friends at that.

While I was still in school, Tricia would usually come around (to my house). She does this every now and then, and other times, we hung “out”.
.
Tricia was in a relationship at the time we first met. From everything I gathered, they were really serious.

I’d seen and liked Tricia as a person. Moreso, I primarily felt indepted to her because of the circumstances that surrounded how we’d met. And the fact that she was already seeing someone had made it easier for me to look away (in desires).

I was more than happy with the kind of friendship Tricia and I had. I couldn’t have asked to be more.
.
With every passing day, I grew fonder of Tricia, but never for once did I ever nurse an idea of a possible affair.

Mama orchestrated all of that.
.
Mama opened my eyes to certain sides of Tricia she’d dubbed, “exceptional”.

They would usually trade calls, check up on each other and even book dates for hangouts.

Mama gradually grew fond of Tricia that in no time, whenever I was around, Mama could never complete a sentence, without referencing Tricia in it.

Mama gradually planted the idea of a possible Tricia and me, in me.

It took a while, but the idea eventually grew on me.

For the first time since Tricia and I had been friends, I began to consider a possible US.

(This was shortly after Tricia had been jilted by her lover).

I didn’t have to do much afterwards.

Apparently, I came late to the party.

Tricia had always had a “thing” for me, but since I’d not expressed desires and she was seeing someone, she didn’t push it.
.
Considering the fact that Tricia and I have long been friends before we decided to take it to another level, our bond only grew stronger.