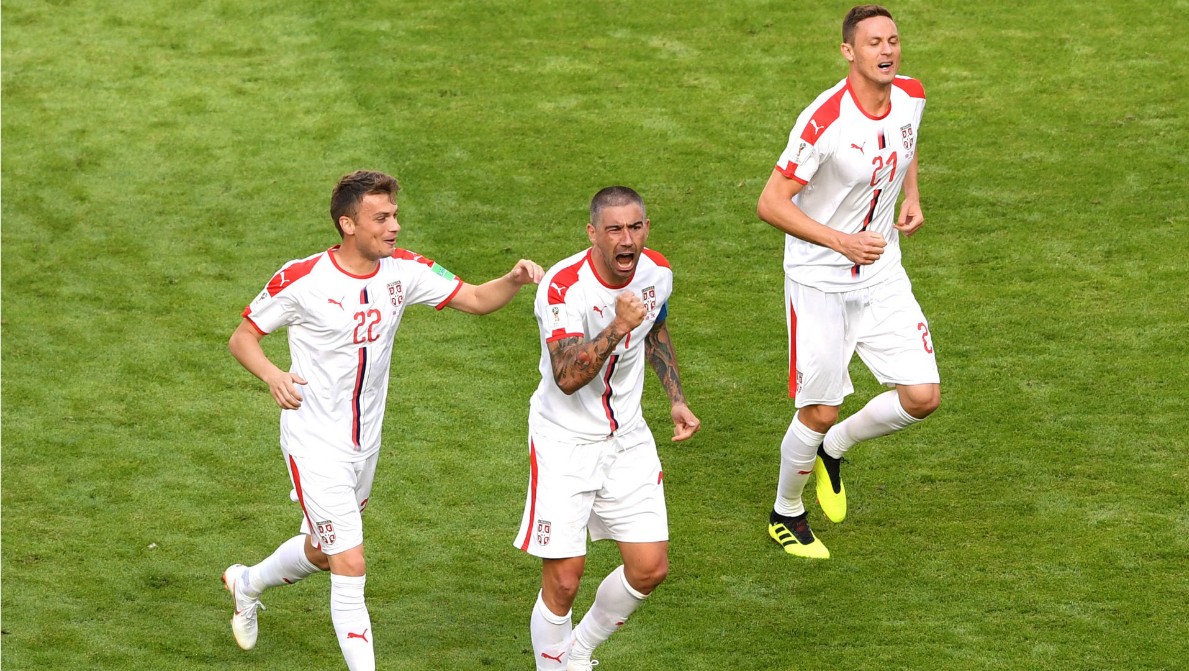 Aleksandar Kolarov’s sensational free-kick proved the difference as Serbia got their World Cup campaign off to a winning start with a 1-0 victory over Costa Rica in Group E.

Serbia, under the tutelage of Mladen Krstajic for the first time in a competitive match, controlled much of Sunday’s clash at Samara Arena, but could not find a way through Costa Rica’s stubborn rearguard until Kolarov stepped just before the hour.

Excellent throughout, Keylor Navas could do little to keep out the defender’s blistering effort, which curled over the wall and into the top corner.

It was nothing less than Serbia deserved for a dominant display, although the best chance of the first half went to Costa Rica’s Giancarlo Gonzalez, who headed over from point-blank range.

Serbia had gone close to prior to Kolarov’s thunderbolt, Aleksandar Mitrovic – a constant thorn in Costa Rica’s side – fluffing his lines when one-on-one with Navas early in the second half.

Mitrovic wasted another chance to wrap up the points late on, but his profligacy did not prove costly as Serbia held on to seal the points.

Both defences were tested in the opening moments – Mitrovic seeing an effort hooked off the line before Gonzalez headed straight at Vladimir Stojkovic at the other end.

Gonzalez spurned another gilt-edged chance 10 minutes later, the Bologna defender heading over despite been unmarked at the back post.

Marking his landmark 104th Serbia appearance, Branislav Ivanovic rolled back the years with a blistering run down the right soon after, but Navas did well to parry his cross away from Mitrovic.

Sergej Milinkovic-Savic should have done better with a close-range effort 27 minutes in, only for the offside flag to spare the youngster’s blushes, before Kolarov drew the best out of Navas with a wicked free-kick.

And Serbia were almost punished for their lack of penetration when Francisco Calvo dragged a strike wide as Costa Rica enjoyed a short spell of possession just before the break.

Real Madrid goalkeeper Navas showed his quality again five minutes after the restart, racing out to deny Mitrovic, who should have done better from 10 yards out.

Navas could do nothing to prevent Kolarov’s stunning opener, though – Kolarov showing his set-piece proficiency with a venomous, dipping strike that flew in the top-right corner.

Oscar Ramirez introduced Arsenal’s Joel Campbell as Costa Rica chased an equaliser, and the forward had appeals for a penalty waved away when he went down under pressure from Dusko Tosic.

Campbell was proving a nuisance, and only a last-ditch challenge from Nikola Milenkovic prevented Costa Rica’s substitute from getting in on goal.

Filip Kostic and Mitrovic both wasted golden opportunities to extend Serbia’s advantage late on, the latter’s frustrating outing ending soon after as he was replaced.

Serbia were not made to rue those misses, however, and – although a touchline skirmish between Nemanja Matic and a Costa Rica coach threatened to derail proceedings – stood firm to claim just their second victory from their last seven World Cup group stage matches.

– Serbia have won their opening game at a World Cup tournament for the first time since 1998, when they did so as Yugoslavia against Iran (1-0).
– Costa Rica suffered their first defeat at the World Cup since 2006 (1-2 v Poland), ending a run of five games unbeaten in the competition (W2 D3).
– Aleksandar Kolarov’s goal for Serbia was the third direct free-kick scored at this year’s World Cup (after Russia’s Aleksandr Golovin and Portugal’s Cristiano Ronaldo), which is already as many as there were in the entire 2014 tournament in Brazil.
– Los Ticos had two shots on target in the opening three minutes, then didn’t manage another until the 91st minute.
– Aleksandar Kolarov’s strike was the first direct free-kick scored by a Serbia/Yugoslavia player at a World Cup tournament since 1998, when Sinisa Mihajlovic netted against Iran.